I have been trying to make it happen

I have been trying to make it happen 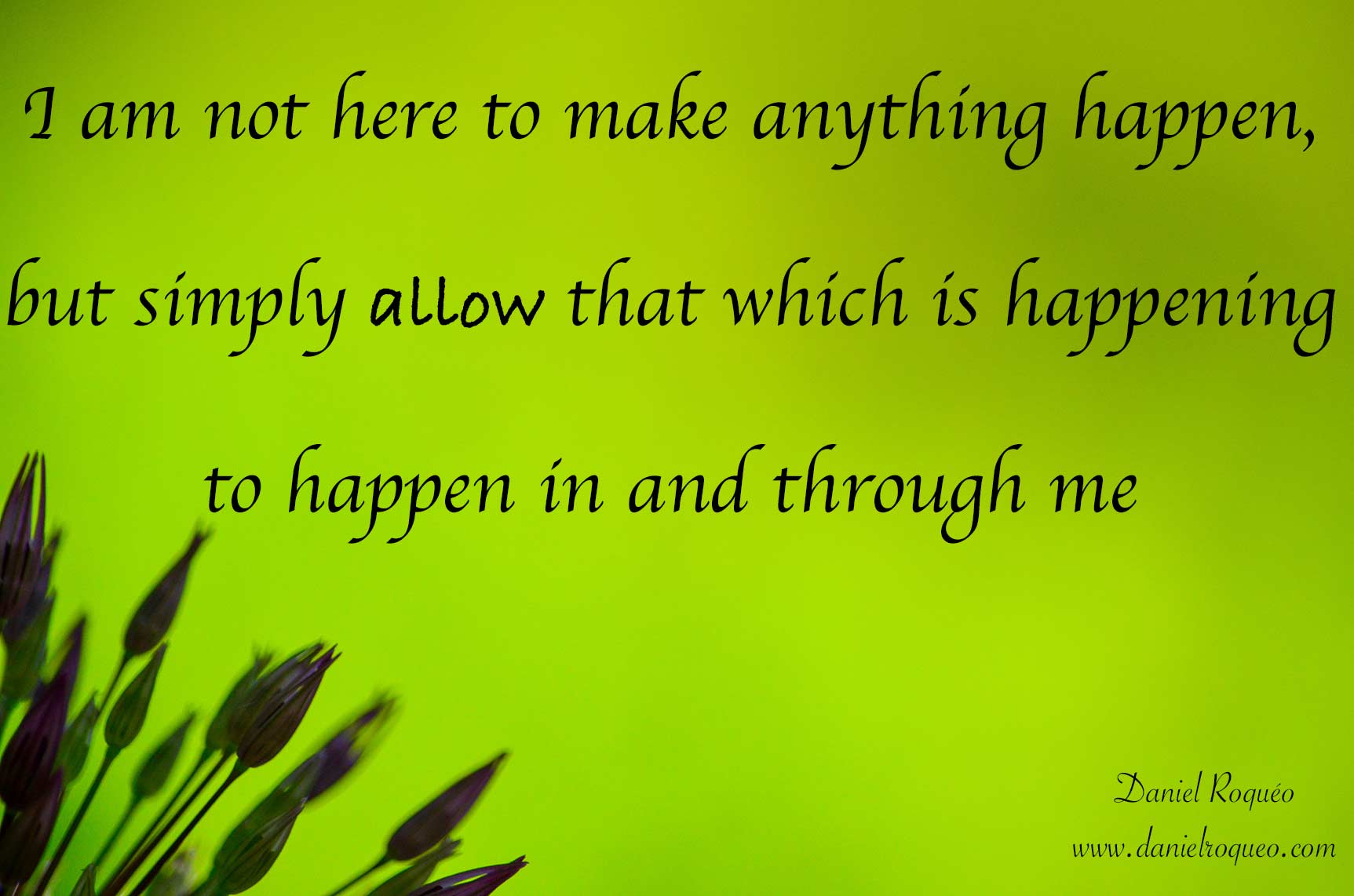 For the last few weeks, I have been experiencing discomfort within. Most of the joy, the inspiration, and the creativity that I have becomes so used to have been missing. Yesterday, I was guided to realize the reason for this. In my creative endeavors, I have been trying to make it happen rather than seeking to allow it.

The joy and inspiration was exchanged with stress and indifference

These last few months have been quite intense for me. Creative wise.

With the release of both the Love & Light Store Academy and the online course How to master the Law of Attraction.

Both were released at the beginning of this year, after lots and lots of work. Creating and releasing them was an amazing process in which I experienced more joy and inspiration than perhaps ever before.

But something happened after the release of them. Rather than slowing down, taking a pause, and just allowing myself to swim in the joy and the gratitude – I went right into trying to get them across to as many individuals as possible.

In the flash of a moment all of the joy and the inspiration were dissolved and for a number of weeks, all I experienced was stress and disharmony.

Along with something that can best be described as indifference.

For all the efforts I put into the marketing, I felt as though I didn’t really care what happened. It was as though I was depressed.

I have experienced this before – but then it has been in the wake of an insight or revelation. It has come as a result of growing and unfolding.

And so the first weeks I didn’t pay much attention to it. I simply took it as a sign of growth and expansion.

However this time the experience lingered. And I remember thinking to myself that perhaps I had got stuck in something.

Still, I was so caught in the doing, that I was not able to take that insight seriously.

I realized that I was trying to make, to force the manifestation into form

A couple of days ago though, I first became aware of the still small voice within me offering guidance and wisdom.

It was telling me that I had got lost in doing, in seeking to make and force manifestation into being.

At first, I merely shrugged it off, telling myself that of course, this wasn’t so. I had just finished an online course on How to master the Law of Attraction.

Of course, I was right on track.

However, the intuitive hits kept coming back until I could no longer ignore them.

I had been caught in trying to make the manifestation happen. Rather than allowing it to happen.

I had been trapped in keeping my attention fixed on the end result. Focused on what I would get rather than on what I had to give and share.

In other words, I had got it all backward. And ironically, this is exactly what the online is all about. How to vibrationally align with a dream or a vision.

The course extensively deals with how we are not to seek to make anything happen, but simply allow it to happen through our willingness to surrender to the vision.

I was acting out of “should” rather than inspiration

But yesterday I was guided to become aware of this. I was led to realize that I was acting out of should.

“You should do this and you should to that to market the Love & Light Store Academy and the online course“. That was what my ego was convincingly telling me.

Under the influence of the fearful ego – I believed that the more I did the faster manifestation would occur.

I remember a couple of times when I felt compelled to write posts and make changes to the Love & Light Store website.

Changes that had nothing to do with the online course and the TLLS Academy.

And I also remember refusing myself to follow that inspiration as there was so much else I “had” to do.

What had really happened was that I got trapped in time. My mind had ventured into the future.

The ego had lured me to think that I had to focus on some future results. It had tricked me into believing that I had to do all these things in order for manifestation to happen.

And so, this is what I need to come back to.

I need to let go of all thoughts and perceptions that I need to make anything happen. Manifestation is not ever a future thing but always a now thing.

It is always happening.

And as I come back to the nowness of this moment, gratefully taking on the feeling tone of it already being done rather than that I have to make it happen – manifestation will occur in and by itself.

I need to remind myself that every dream and vision that I have, is a Divine seed with a life of its own.

This seed has been planted within me, not for me to make it grow but for me to allow it to grow.

In a way, I am like a gardener. I need to tend to the seed, making sure that it has all that it needs in terms of fertile soil, water and everything else that the seed needs.

Inherently within the seed, is everything it needs to grow into its most beautiful expression.

It is the same with The Love & Light Store and everything that is contained within that vision.

This, I had lost my awareness of, thus I was trying to force manifestation to happen.

Where there is vibrational alignment manifestation will occur

Vibration is cause, manifestion is effect. Form always follows consciousness – never the other way around.

Where I was coming from was a place of fear and lack. I was trying to make it happen – because I had lost my awareness that it was happening.

And so I was run by was the perception that if I don’t make it happen – it won’t happen.

Of course, had I kept going like this, the “it won’t happen” would have become my experience as that was the vibration I was emitting.

The how’s of manifestation is not up to me. I can’t intellectually figure out how anything will manifest.

Yet that was what I was trying to do.

As the vibration always is the first cause, and as I acted out of this fear, I put the sacred laws to work – against me.

And so, what I need to do now is to come back to the stillness of this moment. I need to tune into the still small voice within me and give it permission to once again begin to lead and guide me.

The still small voice has been a beautiful guide to me for so long now. As it is a direct link to the infinite mind of God, it is my most reliable source of guidance.

For some reason, I turned my attention away from it. I fell asleep from the insights and revelations I have had. And that have served me so well.

As I think about it, it is actually quite funny that what I had spent so much time seeking to convey in the online course I, myself failed to heed.

Life truly is a wonderful adventure.

Thank you, God for this blessed experience

And so, as I now am beginning to recalibrate myself, I feel myself relaxing. I can feel the joy and the inspiration once again.

It has been missing for quite some time, but I now feel it beginning to seep into me.

Gratitude begins to take me over. Thankfulness for this path of awakening that I am walking. Gratitude for the lessons I am being given, for the insights and revelations that are being revealed to me.

I give thanks for all the challenges I encounter, and for my inherent willingness to grow from them.

And so, in this moment I give thanks for who I am, where I am, and for where I am going.

Life truly is a wonderful adventure and I am so grateful for being able to participate in it. Not having just happened to me, but actually being able to consciously take part in it.

I love this life that I am leading. It is truly a blessed life.

Dear Beloved. To give you the most relevant experience by remembering your preferences and repeat visits we use cookies on this website. By clicking “Accept”, you consent to the use of ALL the cookies. Namaste
Cookie settingsACCEPT
Manage consent

This website uses cookies to improve your experience while you navigate through the website. Out of these, the cookies that are categorized as necessary are stored on your browser as they are essential for the working of basic functionalities of the website. We also use third-party cookies that help us analyze and understand how you use this website. These cookies will be stored in your browser only with your consent. You also have the option to opt-out of these cookies. But opting out of some of these cookies may affect your browsing experience.
Necessary Always Enabled
Necessary cookies are absolutely essential for the website to function properly. These cookies ensure basic functionalities and security features of the website, anonymously.
Functional
Functional cookies help to perform certain functionalities like sharing the content of the website on social media platforms, collect feedbacks, and other third-party features.
Performance
Performance cookies are used to understand and analyze the key performance indexes of the website which helps in delivering a better user experience for the visitors.
Analytics
Analytical cookies are used to understand how visitors interact with the website. These cookies help provide information on metrics the number of visitors, bounce rate, traffic source, etc.
Advertisement
Advertisement cookies are used to provide visitors with relevant ads and marketing campaigns. These cookies track visitors across websites and collect information to provide customized ads.
Others
Other uncategorized cookies are those that are being analyzed and have not been classified into a category as yet.
SAVE & ACCEPT